“I Wrote My 50th Book // Kristen Ashley Knows My Name”

Okay.
So she doesn’t know me, know me.
We don’t go get coffee and gab about our fur and feather babies, about music, about how hard it is to get past that middle point when writing a book.
No.
We aren’t besties like that.
And she probably doesn’t even remember that she knows my name.
But she did, guys, I swear.
For one hot minute.

See, when I went into indie publishing, I did so blindly. I had never read a self-published book before. In fact, I was a paperback snob. If I couldn’t get it at Barnes & Noble, I didn’t read it.
I didn’t know the big players in the game, the Nora Roberts or Julie Garwoods of the indie world.
I just wrote my books and continued to buy my books in stores.
I’d seen these books under my recommended titles on Amazon. These books about Rock Chicks with bright colored covers. But, y’know, “Rock Chicks” didn’t sound like it would be my cuppa, y’know? (Oh, how wrong I was. But I didn’t know that at the time.)
But then Nikki, my beloved beta reader who I got to know because she was the first person EVER to write a review of one of my books on Goodreads with pictures on it. And I had been so excited that I gushed to her about it. And then a friendship formed. Anyway… Nikki told me she had a book I had to read.
It was called “Knight.”
And it was by Kristen Ashley.
So, as any somewhat obsessive new writer (I had just written “Reign” at this point) would do, I checked her out on Goodreads.
And figured something out.
Kristen Ashley was like the fucking Beyonce of the indie author world.
She was the shizz.
The crowned queen.
The one who had been to the mountain top.
See, KA… she had like a MILLION ratings, guys.
A million.
For an indie author.
That’s huge.
Insanely huge.
Rockstar huge.
So my fangirl crush began.
I changed my desktop background to a quote I saw from her in an interview.
I imagined that I could maybe someday possibly hopefully get just a smidgen of he success she has had.
I looked up to her as my Indie Boss Bitch Idol.
I read a ton of her books.
I perused – *cough* stalked *cough* – her social media.
And I thought that maybe someday she would know who I was.
Because that would be like a sign, y’know? That I “made” it.
So cue quite a while later.
I accidentally released a book the same day as KA.
I know. I’m an idiot. What was I thinking? You don’t release an album the same day as Beyonce (or a book on the same day as the Indie Boss Bitch). But I wasn’t paying attention. And I released a book the same day she did.
And, as you do as an author on release day, I was obsessively checking all my social media platforms, trying to stay on top of notifications.
I hopped on Twitter, my least active account.
And I was tagged in a tweet.
I was tagged in a tweet with Kristen Ashley about both our books being released the same day. And the writer of said tweet was trying to figure out which book to read first.
Of course, I liked the tweet.
And because KA was tagged in it, she liked it as well.
But but but…
the story doesn’t end there.
See, someone commented on the tweet saying that she had never heard of me before and was going to go check me out.
And guess what?
GUESS WHAT?
Kristen Ashley liked that comment.
That comment that had nothing to do with her.
Just me.
She liked a comment that was just about little ol’ me.
So for just one moment, one day when we just so happened to release books at the same time, Kristen Ashley KNEW MY NAME.
It’s a big deal, dolls.
And because #PicsOrItDidntHappen, I am attaching the tweet of KA liking a comment about me.
Yes, I screenshot it.
And, yes, I saved it in a file to look at when I am having a crummy day.
Because the Bookworld Beyonce knew my name damnit.
And that is something worth screenshooting and saving, framing, hanging on the wall, writing a blog post about. 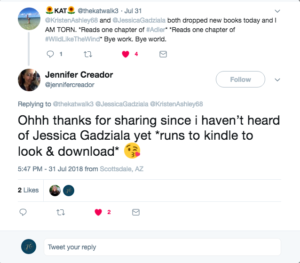 Hey dolls! So, I finally, finally took the vacation I said I was going to…

Tea Talk: Homesickness So, as many of you know, just shy of two years ago,…

Hey dolls! So a few of you have been asking for recipes, and I decided…

Get Social
Copyright © 2018 · Jessica Gadziala
Designed by heychloe.com
Back To Top